The “Grande Cimenterie du Katanga”, the largest producer of lime and, in the future of cement, in the Katanga province of the Congo, was founded in July 2011 as a joint venture between Gécamines (the leader in mining and metal production in the Democratic Republic of the Congo) and HMIE (an African Equities affiliate specialised in the development of industrial projects in Katanga). The West China Cement Group became the main shareholder of the company in 2018, alongside the two original shareholders. 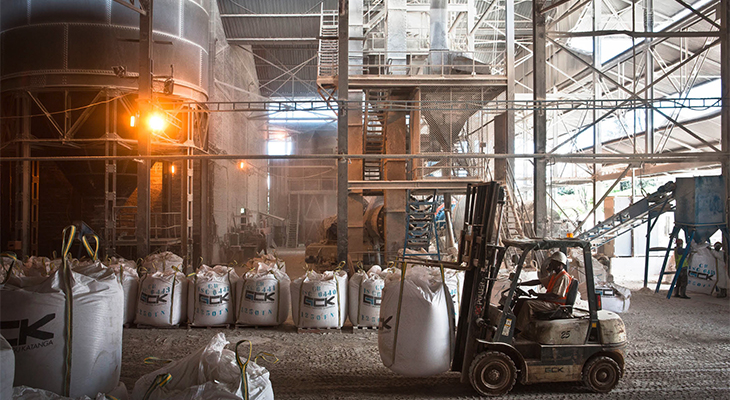 GCK was created on the foundations of the former Gécamines CCC factories (Calcaires, Chaux et Ciment - Limestone, Lime and Cement) in Kakontwe, which had been producing lime, cement and related products for over 50 years. In April 2012, the quarry and former Gécamines’ facilities were combined in the GCK industrial group.

Over $40 million in investments were initiated in 2012, notably to carry out a bankable feasibility study, environmental impact studies, market studies, mineralogical tests and geotechnical and drilling studies in order to obtain a complete understanding of the site’s deposit of blue limestone. Investments were also committed to the renovation of the former GCK facilities, the rehabilitation and clearing of the quarry and to restarting the production, distribution and sale of lime. The factory can now produce over 400 tonnes of lime a day.

The feasibility study to develop extraction and quarry operations and to restart the production and sale of lime and cement was finalised in 2014. It was prepared by PEC Consulting, an American firm specialised in this type of study.

GCK now has over 80 million tonnes of proven reserves of high-quality blue limestone which are accessible and workable for the production of lime and cement. This will enable it to ensure production and an industrial future of over 50 years for its future cement and lime facilities.

West China Cement (WCC), one of China’s largest cement groups, joined the partnership (GCM/HMIE) in September 2018. Its goal is to reach production of one million tonnes of cement and two hundred thousand tonnes of lime by 2021.

An investment of over $160 million was made in September 2018, coordinated thanks to the technical expertise of WCC, for the construction of a new cement plant on the CGK operations site by the quarry. The plant will have a production capacity of one million tonnes a year. A new lime plant with a capacity of 200,000 tonnes a year will also be built. Both will use the most recent technology to reduce coal and electricity consumption to limit emissions of gases and CO2.

In December 2018, with the support of WCC and HMIE, GCK signed a turnkey construction contract for the new cement and lime plants with the Chinese construction company Sinoma Engineering (a world leader in the construction of this type of infrastructure). According to the contract, construction work will start in January 2019. It includes firm deadlines (with penalties) and provides a guarantee to GCK that the new cement plant will be operational by 2021, at the latest.

The development of GCK's infrastructure and industrial operations is important for its shareholders as well as for the economy of the entire sub-region. The province of Katanga does not currently produce any cement or lime and has to import these materials from Zambia and South Africa. It must use foreign currency and pay very high prices (given the distances to be covered to bring in the materials).

GCK therefore intends to quickly provide the mining and industrial area of Katanga and the local population with reasonably priced lime and cement.

In addition, it will also soon become one of the main employers in the Likasa and Lubumbashi region by promoting local employment, the relaunching of the construction sector, the building of moderately priced housing and by limiting currency flight to neighbouring countries producing lime and cement.

January 2019
Start of construction work for the new cement and lime plants.

March 2018
Signing of a partnership agreement by HMIE, Gécamines, GCK and WCC.

July 2011
Creation of GCK by HMIE and Gécamines.